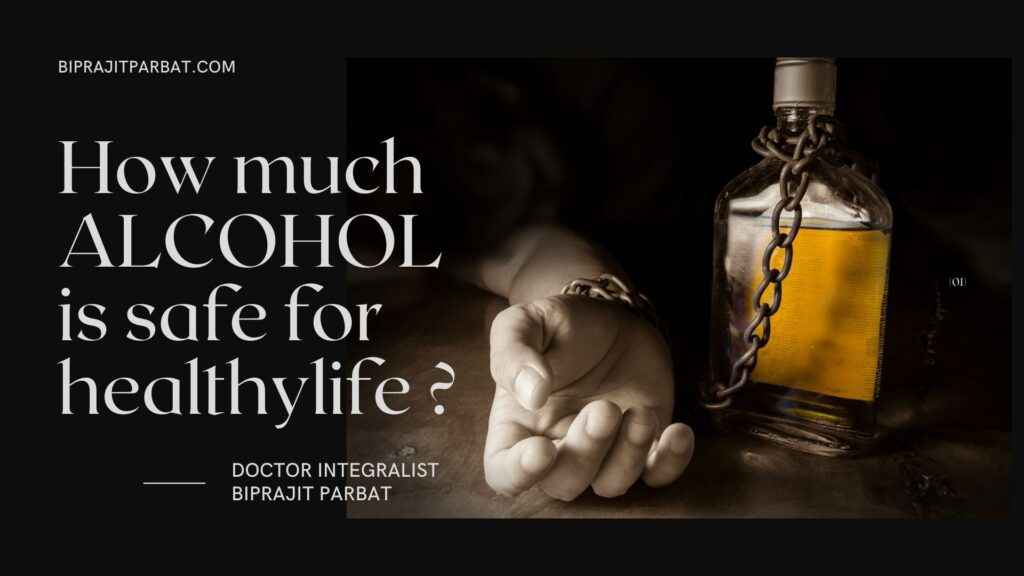 How much ALCOHOL is safe for healthy lifestyle – a scientific review.

How much ALCOHOL is safe for healthy lifestyle – a scientific review.

There is a relationship between alcohol and heart attack. Alcohol causes extensive damages to the cardiovascular system.  Alcohol of any form like binge drinking, heavy drinking, or alcohol use disorder, that is AUD leads to heart diseases.

Several studies conducted to find out the relationship between alcohol and heart attack found that any kind of alcohol intake along with being obese or overweight increases the risk of heart attack by 40%.

Another study conducted by the Centers for Disease Control and Prevention or CDC revealed because of alcohol abuse, 88000 Americans on average die every year.

According to the CDC alcohol abuse of any kind causes clots and hardened arteries that lead to a heart attack. Drinking too much alcohol blocks the arteries of the heart so blood flow to the heart becomes less hence the heart does not get the proper amount of oxygen that it requires. It furthermore causes weakening of the heart muscle, which causes the death of the heart muscle, and finally, the heart stops breathing.

Any poison is safe at lower dose and even may provide some medicinal benefits. But here the catch who leaves the dose of that medicines in the hands of patients. Especially when we all know that alcohol is addictive and it has significant chances of addiction.

Once you are in that “NEED” zone – it will destroy you from your heart, brain, physical and mental health.

Alcohol is kept in the bars, hotels, restaurants, local shops and places of celebration. And alcohol by any definition is a drug. The placement of alcohol with such easy reach promotes addiction and dependencies. Especially when the person who will earn money selling it more.

If a safe drinking is advocated – the alcohol should be made a prescription medicine and a pharmacist should dispense it.

The signs of a heart issues in alcoholic are:

d. Swelling in the ankles

How alcohol causes a heart attack?

Alcohol drinking can be kept in three different categories as moderate drinking, binge drinking, and heavy drinking. So, let’s check out the relationship between the amount of alcohol intake and heart attack:

For some people drinking a moderate amount of alcohol lowers the risk of heart attack as it has some relaxing effects on the mind. But drinking more than three servings of alcohol increases the risk of heart attack as it boosts the level of toxic substances in the blood. Moreover, drinking too much too often leads to an increase in the lipids of the blood that is a type of fat. Furthermore, it leads to hardening of the arteries and increasing arterial plaque and cholesterol. Thus, it can cause a heart attack at any time.

Binge drinking is more harmful to the body than moderate drinking. A quick and high level of alcohol consumption that can cause intoxication in a person is called binge drinking. A person with an underlying heart problem is more at risk of heart attack if he consumes large amounts of alcohol at a time. As it results in blood pressure to quickly rise and make way for a heart attack. The research found that drinking six or more servings of hard liquor at a particular time boosts the risk of stroke or heart attack for seven days after it.

I already had heart attack. I had bypass surgery or angioplasty done. Can heart attack patient drink alcohol?

The simple answer is “NO”. You can take your poison only if you do not have control over it or occasionally you can take.

It is said “Red wine is said to improve heart health” or “Moderate drinking is associated with improved heart outcome” – But these are associations only. There were not cause and effect. No multicentric randomized trial to prove so.

Poison if taken in very low dose may not kill you. But that does not make it a good one.

On top of that Alcohol dependence – “means I have to take it” – is itself a physical and mental issue known as “drug dependence or addiction”. It is not normal and should be treated.

Can I drink alcohol with heart failure?

Absolutely Not. Alcohol itself can cause heart failure – Alcoholic cardiomyopathy. Alcohol can cause heart arrhythmias – means electrical abnormality in heart patients. Alcohol increases fat deposition on the body and obesity. You can take alcohol only if you do not have any control over it. Buy again this condition needs treatment.

Therefore, we have seen that drinking alcohol increases the risk of heart attack by many folds. If you can avoid it – please avoid it. If you cannot avoid at least try your level best to follow the quantity guidelines. Remember, prevention is better than cure.