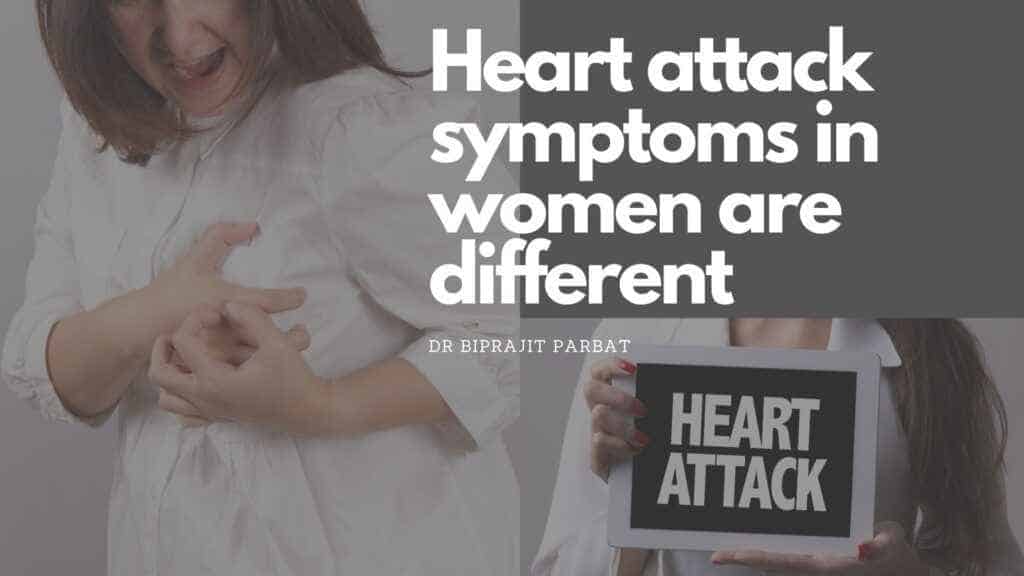 Heart attack or myocardial infarction occurs when the supply of blood to the heart is rapidly reduced or cut off abruptly, causing the heart muscle to die due to lack of oxygen. A heart attack may occur silently or be strong enough to cause sudden death.

Concerns about the heart attack in women –

Heart diseases kill more women than breast cancer and uterine cancer. If nothing is done to address the situation, the figures are bound to keep going up.  The number of women suffering from myocardial infarction has risen from 21% to 31%, which is greater than  in young men.

According to research, the probability of women getting lipid-lowering therapy is smaller when you compare it to that of the men.

It also includes the availability of other medications like beta-blockers, antiplatelet medicines, coronary revascularization, and coronary angiography. The management of women with heart attack  is different from that of men for some reasons. The presentation of heart attack in women is often dissimilar from men.

Women are more likely to show no signs of CHD (heart attack & related diseases = coronary heart disease) than men, making it easy to miss their heart attack than men.

Again, coronary artery disease (CAD) is naturally understood as a man’s disease. Therefore, women who walk into the emergency department with chest pain can be easily undermined as “low-risk.” Therefore, it is necessary to pay keen attention to the symptoms of myocardial infarction in women.

A study on young people with heart attack also suggests a rise in diabetes and high blood pressure. According to studies, young women were more prone to develop diabetes, high blood pressure, and chronic kidney disease. The problem is closely tied to weight issues and obesity in women.

With the traditional belief and long-held by women about parenting and household chores, it is more difficult for women to focus on their health and wellness. Most women, especially those in the working class, often have more time for others and less for themselves.

Symptoms of Heart Attack In Women is different than men-

Although chest pain is a synonymous symptom of a heart attack in both men and women, women have higher tendencies of reporting much more unusual symptoms than men.

Some women report symptoms such as the following:

Other less common symptoms of heart attack or myocardial infarction in women are:

The most frequently reported symptoms after a multi-center study of 515 women include unusual fatigue, shortness of breath, sleep disturbance, anxiety, and indigestion.

A good number of these women as much as (78%) reported at least one symptom for a month and a half before their heart attack occurred.

Despite the symptoms, which can present up to a week, most women fail to seek immediate medical attention.

Delay in seeking medical attention and treatment for heart attack can reduce one’s chances of survival.

It is essential to seek rapid medical attention when you notice any of the signs of CHD. Treatment aims to restore the normal flow of blood to the affected areas of the heart quickly. Treatment helps to reduce the severity of the damage to the heart as a result of CHD.

What is Heart attack or Acute Myocardial Infarction?

This is a medical name for a heart attack. A heart attack can be either mild or life-threatening, depending on its severity. A blockage of blood flow to the heart can occur due to the accumulation of plaque, a mass of harmful fat, cholesterol, and other cellular waste products. The heart muscle needs a regular supply of blood for it to function, and this blood comes from the coronary arteries.

What is Coronary Artery Disease?

The heart becomes starved of oxygen without an adequate supply of blood and the vital nutrients it needs for proper function. This leads to chest pain also called angina. A heart attack is likely to occur when one or more of the coronary arteries becomes completely blocked.

Causes of heart attack in men vs women –

Coronary heart disease affects over 6.6 million women in the USA alone annually and remains one of the leading mortality treats in women around the world. Heart attak cause, symptoms and outcomes are different in men and women.

Without age being considered, more women will die from acute myocardial infarction (AMI) within a year of their first symptoms (19% of men and 26% of women).

Also compared with men, women are much more likely to develop unusual heart attcks –  like

Premature coronary heart disease (CHD) is quite rare in young women because ACS in this group seems distinctive. A small existing data on AMI frequency among young women reveals that over three thousand women under the age of fifty-five are hospitalized with AMI in the USA annually. In the years between 2001 to 2010, women demonstrated either no changes in women (30-39 years of age) or a slight increase in women (40 to 49 years of age) in AMI hospitalization rates.

Mortality risk in young women with AMI is shrouded with many unanswered questions, women are often older when they experience their first AMI with an average of 71.8 years compared with 65 years in their male counterpart. Researchers have observed that AMI is more prevalent substantially in postmenopausal women even though it is difficult to explain the effect of age from that of menopause.

Women diverse racially and ethnically with AMI have different experiences when it comes to risk factor burden, presentation, evidence-based care, and long-term outcomes. The occurrence of myocardial infarction (MI) is more frequent in black women than in every other racial and ethnic groups. Black women are also at a higher risk of sudden cardiac death (SCD) and their survival rate after hospitalization is about one-third compared to white women.

AMI prevalence concerning race and ethnicity interrelates with age. Women between 55 years of age and less with AMI, black women stand a higher risk of mortality than their white counterparts even after adjustment for chronic renal failure, insurance, and treatment in the first day.

Sex-specific research has shown that although men and women have similar risk factors for CHD, certain factors are more potent in women, risk factors such as depression, tobacco abuse, type 2 diabetes, and some other psychosocial risk factors. Data from the recently completed publications Variation in Recovery: Role of Gender on Outcomes of Young AMI Patients (VIRGO) study demonstrates that the health status of young women living with AMI is poor compared to men.

A recent study of young women with AMI shows that women fail to accurately diagnose their risk of heart disease. Women also complain about the limited access to preventive cardiac care before AMI.

This study calls for improved cardiovascular knowledge among women with a strong emphasis on easy access to medical care for preventive measures.  We will throw more light on some certain cardiovascular risk factors below:

Cigarette smoking is the number one recurrent cause of heart attack in women mostly women below the age of 55 years old, it increases their chances of having a heart attack to as high as 70%. Among patients with AMI, women under the age of 55 have higher chances of tobacco abuse and obesity compared with other women of distinct age grade. The abuse of tobacco in America has declined in recent decades but is less pronounced in women than in men.

Blood pressure is another major risk factor for heart attack in women with a population-attributable risk of 36% showing that the risk of having a heart attack could be reduced by 36% if hypertension is removed as a risk factor. It is more likely to cause a heart attack in women when compared to men. Isolated systolic hypertension is a more common type of hypertension in older women. Women with blood pressure greater than 185 mm Hg have a 30% chance of dying from cardiac arrest compared with women with a level less than or equal to 135 mm Hg. Surveys regularly show low rates of hypertension awareness, control among women, and treatment. The rates have increased over time since the past survey.

Long-term cardiovascular risks are associated with cholesterol levels in blood.

There is a lipid paradox where patients with low triglycerides and low-density lipoprotein cholesterol levels have high in-hospital monthly mortality rates.

Seven percent of American women are extremely obese and one-third of the entire population are partially obese. Defined as a body mass index greater than 40kg/m₂, obesity is more common amongst black women (54% are obese while 15% are extremely obese). The prevalence of obesity increased by 6.6% between 2003 to the year 2011 among women 60 years of age and above. Compared with slim women, women in the heaviest category show a higher risk for cardiovascular occurrence.

Obesity is a major risk factor for AMI in women, the risk associated with metabolic syndrome is higher in younger women than older women thereby increasing their odds of AMI by 5-folds.

What Happens During A Heart Attack?

The heart muscle is surrounded by a network of blood vessels usually known as the coronary arteries which supply the heart with blood containing oxygen and nutrients. For the heart muscle to function effectively and efficiently, it needs a constant supply of nutrients and oxygen.

As you grow older as a woman, there is the need to become more aware of the factors that can increase your risk of CHD. The greater the risk factors you have, the greater your chances of experiencing a heart attack.

Get yourself properly screened for possible heart disease risk factors.

Seek an alternative option if you question your health and symptoms persist.

Study and know about some common signs and symptoms of heart disease which may be indicators for a possible heart attack.

Seek emergency care if you have persistent chest pain or other symptoms of a heart attack that may last longer than 5 minutes.

Some people, mostly women often have a heart attack without even having any symptoms which are known as a silent or asymptomatic myocardial infarction. It is more common amongst people with diabetes and may be diagnosed during a doctor’s check-up.

It is essential for women over the ages of 40 to seek the advice of a medical doctor or a nurse to have a proper check of their heart attack risk.

For women living in England between the ages of 40 to 74, the NHS health check is a good place to start to check your cardiovascular health. It is also essential to keep an appointment with the doctor to review your risk every 5 years. Also, it is essential to make out time once in a while to check your cholesterol and blood pressure.