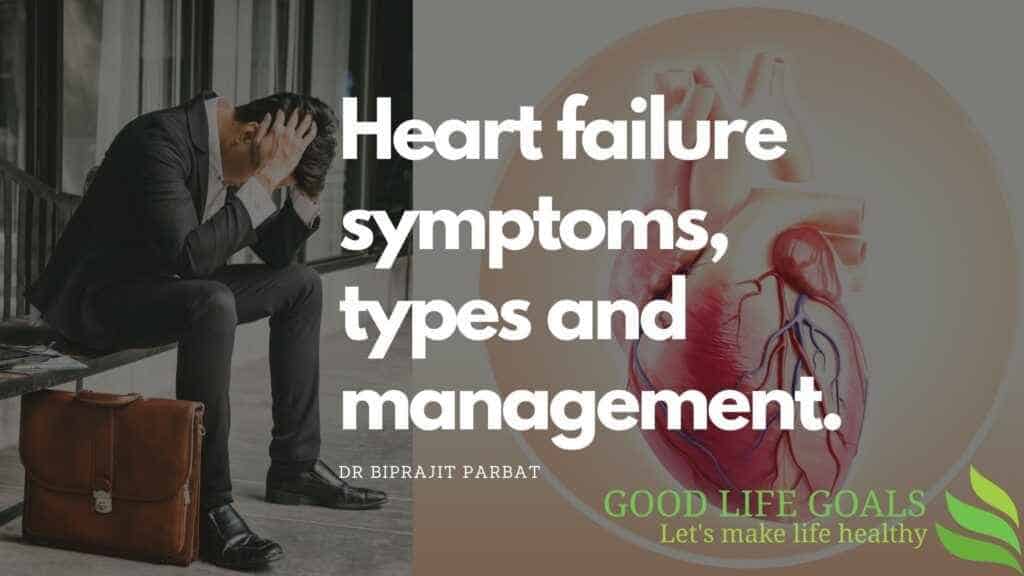 Heart failure Types, Symptoms, Diagnosis and Treatment – a comprehensive review for all

What is heart failure?

Heart failure means the heart cannot keep up with the demands on it, particularly the heart’s inability to pump blood with usual efficiency.

It may result from the failure of right or left or both ventricles.

Or it may result from either the pump failure due to weak heart muscles or heart muscles fail to relax to receive the blood before it pumps.

For various reasons, the blood flow to the heart and body slows down, and the heart’s pressure increases. As a result, the heart cannot pump enough oxygen and nutrients to satisfy the body’s needs.

The heartbeat can stretch to prevent more blood from flowing through the body or respond by tightening and thickening.

.As a result, the kidneys respond to the body’s ability to store water (fluids) and salt. When fluid builds up in the hands, feet, ankles, feet, lungs or other parts of the body – a condition known as congestive heart failure (CHF).

Congestive heart failure occurs when the ventricles are unable to pump adequate blood into the body. As a result, blood and other fluids accumulate in the lower body, liver, stomach and lungs. The condition is severe and requires you to seek instant medical assistance.

During the early stages, you are less likely to detect any complications in your health. However, as your condition progresses, you will notice significant changes in your body.

Symptoms indicating your condition has worsened.

In 2015, over 40 million individuals were reported to have heart failure globally.

In general, 2% of adults have heart failure, and the rate ranges between 6% to 10% for individuals over 65 years.

Above the age of 75, heart failure rates are higher than 10%.

Heart failure rates are expected to increase. The increase in the rates is major due to prolonged lifespan and high survival rates from other types of cardiovascular illnesses and increased risk factors, specifically obesity, diabetes, and hypertension. Heart failure remains the foremost cause of hospitalization for individuals over the age of 65 years.

In the US, 5.8 million people are affected by heart failure, and 550,000 new cases are diagnosed annually. The disease was the leading cause of hospitalization for people aged 85 years and above and the second-most common for people aged between 65 to 84 years in 2011.

It is estimated that 1 out 5 adults develop heart failure at the age of 40 years and about half of them die within 5 years of diagnosis.

Heart failure is more prevalent among Native Americans, Hispanics, and African Americans and is associated with high hypertension and diabetes cases in these ethnic groups.  New immigrants from the Eastern Block nations like Russia are also greatly affected by heart failure and associated with inadequate preventive health care.

Despite the significant improvements in heart failure risk factors prevention in the UK, the rates have continued to rise as a result of ageing factor and population increase. In general, heart failure rates are similar to the four leading causes of cancer, i.e. colon, prostate, lung and breast combined.

Valvular heart disease is the leading cause of heart failure in tropical countries. As developing nations have become more affluent, the cases of obesity, hypertension and diabetes are on the rise, which has increased the number of people affected by heart failure.

The heart’s left side carry oxygenated blood and transport it to all parts of the body except pulmonary circulation. In Left-sided heart failure, blood accumulates in the lungs, causing fatigue and respiratory symptoms due to insufficient oxygen and blood supply.

During this type of heart failure, an individual experiences rapid breathing, Crackles that point out pulmonary oedema and cyanosis manifest as a late symptom of severe pulmonary oedema. Other symptoms include irregular heartbeats and heart murmurs which is a sign of valvular heart disease. There are two types of left-sided heart failure:

The left ventricle is unable to contract normally causing the heart inefficiency to pump adequate blood into circulation.

The left ventricle is unable to relax normally. The heart cannot be correctly filled with blood in between the resting period of every beat.

Backward failure of the left ventricle leads to blood accumulation in the lung’s blood vessels and is manifested through respiratory symptoms. This type of heart failure can be grouped into the failure of left atrium or ventricle or both within the left chamber.

An individual experiencing backward failure will develop dyspnea at rest and shortness of blood. Elevated breathlessness on lying flat also happens and is normally examined based on how many pillows are needed to lie comfortably. The left ventricle’s forward failure may lead to signs of poor disrupted systematic circulation like confusion and dizziness.

Here the right side heart fails to pump blood to the lungs. It may happen due to heart muscle weakness, heart attack or heart valve issues.

This type of heart failure is normally resulting from pulmonary heart disease, which is brought about by difficulties of pulmonary circulation like pulmonic stenosis and pulmonary hypertension.

An individual with right-sided failure may experience spleen and liver enlargement, ascites and indentation of peripheral edema.

Backward failure of the right ventricle causes accumulation in the systematic capillaries.

This produces an excess amount of fluids in the body resulting in swelling around the foot and ankles.

Increased urge to urinate during the night happens when the legs’ fluid is reversed to the bloodstream while lying down.

The lung’s inefficiency in finger percussion and diminished breath sounds at the lung’s bases may indicate a pleural effusion (collection of fluid between the chest wall and the lung).  Although it can happen in separated left or right-sided heart failure, it is more prevalent in biventricular failure given that pleural veins drain into both pulmonary and systematic venous systems.

Heart failure may happen in high output cases where an abnormal amount of blood is pumped such that the heart cannot keep up. This can result from overload cases such as arteriovenous malformations, chronic severe anemia and kidney diseases.

How heart failure is diagnosed?

This is a painless, simple test that measures and records the electrical activity of the heart. The test reveals how your heartbeat and identifies whether you have a steady or an irregular rhythm. It also shows the timing and strength of electrical signals passing through your heart. An electrocardiogram may help identify the thickness of your heart’s pumping chamber walls.  Abnormally thicker walls make it extra hard for the heart to pump blood. The test can be used to reveal symptoms of a previous or a present heart attack.

A chest Xray is used to take photos of organs and tissues inside your chest like blood vessels, lungs, and hearts. The test results can be used to evaluate pulmonary congestion, heart size and alternative cardio-pulmonary illnesses that may result in an individual’s symptoms.

BNP is a neurohormone found as secretory granules in both ventricles and less concentration in the atria. A BNP test is taken to examine the level of hormone present in your blood.

The level of this hormone elevates when you have a heart failure. This helps to know the disease severity and progression.

Biomarkers provide useful information as well as the level of severity of an ongoing heart failure.

A two-dimensional echocardiogram with Doppler is used for the initial examination of individuals having heart failure. TTE detects valve function, ventricular function, wall motion and thickness.

Other methods include tricuspid valve regurgitant gradient combined with the examination of inferior vena cavil diameter and its functioning during respiration, which offers central venous and systolic pulmonary artery pressure estimates.  Many of these abnormalities should be examined because they have a great predictive value in treating heart failure. Evaluation of ventricular function using TTE is effective when an individual has an acute decompensated heart failure.

MRI test help evaluate left ventricle volume in comparison to that obtained using echocardiography. The additional information about fibrosis, viability, and myocardial perfusion obtained through MRI can help understand the cause of heart failure and evaluate outcome.

MRI gives a high anatomical resolution of all heart components and the surrounding structure; thus, it is highly preferred in known or suspected cardiovascular problems.

Cardiac CT scans give an accurate evaluation of heart structure and functioning even the coronary arteries.

However, both Cardiac CT and magnetic resonance imaging tends to be inaccurate in individuals with high heart rates.

The utilization of coronary angiography and cardiac catheterization are effective in individuals with new-onset angina and heart failure symptoms.

For individuals with severe kidney dysfunction and ACE-I intolerance, a combination of long-acting nitrate and hydralazine has been identified as effective. It has been revealed to lower mortality in individuals with moderate heart failure. It is majorly effective in African-Americans.

A combination of ACE-I, beta-blockers, and mineralocorticoid antagonist can help lower mortality and improve symptoms for individuals with symptomatic heart failure characterized by low ejection fraction.

For individuals showing symptoms while still on mineralocorticoid receptor antagonist, beta-blockers and ACE-I, the risk of hospitalization or death due to heart failure can be lowered using valsartan/sacubitril.

Medications for chronic heart failure does not have a mortality benefit.

An automatic implantable cardioverter-defibrillator (AICD) has been shown to lower the mortality for individuals with reduced left ventricular ejection.

The primary goal of treatment is to improve heart failure symptoms and prevent the disease’s progression.

In sudden heart failure, the main focus is to ensure enough perfusion and oxygen delivery to vital organs. This involves ensuring that circulation, breathing and airway are sufficient.

For individuals with chronic heart failure, the goal for treatment is to –

Heart failure can be as a result of different conditions. Controlling and treating the modifiable risk factors and causes are necessary i.e. –

Treatment of existing risk factors is normally the initial approach to heart failure treatment. In most heart failure cases, either no underlying cause is found, or treatment of the underlying cause fails to achieve normal heart functioning.  In such cases, device and medical treatment methods offer a significant improvement in outcomes, reduced potential death or hospitalization, exercise tolerance and symptoms relief.

Remote monitoring can be ideal for reducing complications for individuals with heart failure.

Behavior modification is a major focus in chronic heart failure management program where dietary guideline concerning salt and fluid intake are given.

For individuals with regular admission to hospital or advanced heart failure strategies to prevent readmission such as visiting nurse at home or telephone follow-up are applied.

Be aware of heart failure symptoms. Seek medical attention if you are having any of the symptom. The earlier medical attention you seek – the lesser in the chance of you getting the complications and progression of the disease.