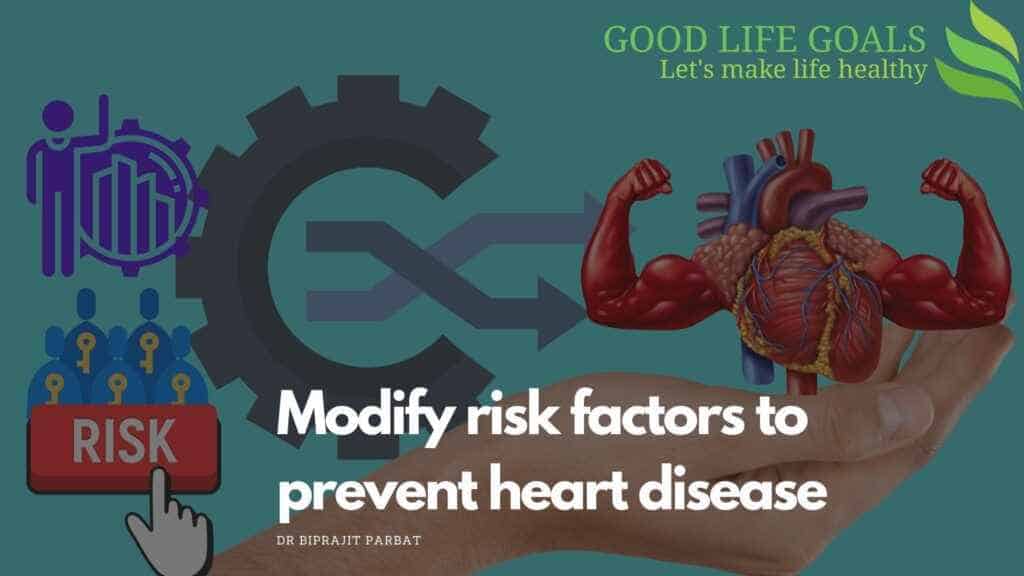 Know the risk factors for Heart disease & prevent it.

Heart and related diseases can manifest themselves in a number of ways, such as –

According to the World Health Organization, more than 17 million people in the world die due to cardiovascular disease each year.

Moreover, this disease is responsible for half of the deaths that take place in the United States.

In the United States, more than 80 million people suffer from some form of heart & related disease. However, thanks to several studies that involve thousands of patients, scientists have identified certain variables that play important roles in a person’s chances of developing cardiovascular disease. These variables are known as risk factors.

The risk factors associated with a disease can be divided into two categories:

The main risk factors are those that have been proven to intervene in the risk of cardiovascular disease. Secondary risk factors can increase your risk for these diseases.

That said, simply by controlling as many risk factors as you can through medications and/or lifestyle changes, you can reduce cardiovascular risk.

Cholesterol, a fatty substance (a lipid) carried in the blood, is found in all cells of the body.

The liver produces all of the cholesterol that the body needs to form cell membranes and produce certain hormones.

The body gets extra cholesterol from foods that are animal-based (meat, eggs, and dairy products) or that contain large amounts of saturated fat. When the blood contains too many low-density lipoproteins (LDL or “bad cholesterol”), these begin to accumulate on the walls of the arteries, forming plaque and thus, initiating the process of the disease called “atherosclerosis.”

When plaque builds up in the coronary arteries that supply the heart, there is an increased risk of having a heart attack.

HDL: It is in charge of dragging cholesterol from the arteries to the liver so that it eliminates it. Therefore, it protects the body from the accumulation of cholesterol in cells and arteries.

LDL: It transports cholesterol throughout the body and, if it is above an acceptable value, allows it to be deposited in the arteries. This complex LDL cholesterol is derived from diets rich in saturated fat.

Cholesterol, in normal numbers, is essential for the metabolism of any cell. It is only dangerous if your blood levels rise. People with a blood cholesterol level greater than 200 mg/dl have a higher risk of having a heart attack than those with lower levels.

Diabetes mellitus is a syndrome characterized by the presence of high blood sugar secondary to alterations in the metabolism of carbohydrates.

It is caused due to failures in the secretion of insulin by the pancreas and/or defects in its actions on the tissues on which it acts. The prevalence of diabetes is very high worldwide, and further growth is expected in the next twenty years.

This increase is mainly associated with the obesity and overweight epidemic that exists and occurs to a greater extent in developed and developing countries.

Diabetes causes a rise in glucose in the blood, triggered by the body’s inability to produce enough insulin or respond to its action properly.

Furthermore, many diabetic patients have other risk factors at the same time, which represents a great increase in cardiovascular risk in these patients. The main world associations for the study and treatment of diabetes have established a series of recommendations regarding metabolic control and other risk factors aimed at preventing the sequelae of this metabolic disease.

The aim is to reduce its morbidity and mortality (complications and deaths), increase the quality of life and, ultimately, reduce the impressive social and health costs that diabetes represents.

According to the American Heart Association, more than 400,000 Americans die each year from smoking-related diseases.

Many of these deaths are due to the effects of tobacco smoke on the heart and blood vessels. Smoking raises your heart rate, hardens large arteries, and can cause heart rhythm irregularities. All of these factors make the heart work harder.

Additionally, smoking leads to increased blood pressure, which is a dangerous risk factor when associated with cardiovascular diseases. Nicotine is the most important active ingredient found in cigarette smoke. That said, many other chemical substances such as tar and carbon monoxide also harm the heart in many ways.

High blood pressure (arterial hypertension) significantly increases the risk of getting heart disease, heart attack, or even a stroke.

Hypertensive people who also smoke, are overweight, or have high blood cholesterol levels have a much higher risk of suffering from heart disease or stroke.

Blood pressure can vary depending on the degree of physical activity and age, but normal values for a healthy adult at rest should be 120/80.

High blood pressure is one of the main cardiovascular risk factors. However, the coexistence of other concomitant conditions greatly influences the final prognosis of the patient. Furthermore, risk stratification is one of the main steps that serve the adequacy of therapeutic decision-making.

Studies suggest that anxiety, as an emotion, is found to be an independent risk factor for incidents of coronary heart disease.

Following are the points to be noted –

These conclusions show that anxiety constitutes a risk factor for coronary heart disease.

Anxiety is a strong predictor of fatal and non-fatal coronary heart disease events.

Anxiety symptoms need to be considered in the risk and subsequent treatment of patients who have suffered a myocardial infarction, confirming that high levels of anxiety increase the risk of coronary heart disease in men and women.

The link between anxiety and cardiovascular risk has taken a long time to prove.

The incidence of anxiety and depression disorders is high among patients with cardiovascular diseases. The results of the analysis of the Danish DenHeart registry show that almost 1/3 of patients with heart problems have typical symptoms of anxiety and 1/5 of depression. Studies to date also show a relationship between these symptoms and the risk of hospital readmission, cardiovascular events, and death. However, these studies generally addressed selected groups of patients with a confirmed ischemic disease or heart failure.

The presence of depressive symptoms was the strongest risk factor for the death of all, increasing this risk twice during observation.

The presence of anxiety symptoms increased the risk of death by approximately 30%.

As the researchers emphasize, symptoms of anxiety, stress, and depression significantly worsen the prognosis of patients with heart disease, increasing the risk of death to a similar degree, or perhaps even greater, than the other known cardiovascular factors.

Minor or contributing risk factors for heart diseases those can be changed.

Although these two risk factors go hand in hand, they are not necessarily mutually exclusive. This means that a person can be sedentary without necessarily being obese and, in those cases, the cardiovascular risk is also higher.

To control these risk factors, it is important to eat properly and perform at least 30 minutes of physical activity daily.

A sedentary lifestyle can also lead to an increased risk of getting cardiovascular diseases. Regular exercise lowers blood pressure, increases HDL cholesterol, and helps prevent obesity and diabetes. In addition to that, it helps to reduce stress, which is considered another factor that can lead to complications in heart patients.

That said, before starting any physical training program, it is recommended that you consult with your doctor.

Inadequate diet is another important factor that can increase the risk of cardiovascular disease. Diet with high refined sugar, highly processed foods and trans fats are associated with increased heart diseases. It is important that obese or overweight patients have correct hydration and follow a balanced diet in order to avoid this risk.

Excessive alcohol consumption can raise the blood pressure and triglyceride levels and thus, increase the risk of cardiovascular problems.

Moderate intake of red wine, with a maximum of two glasses a day for men and one for women, can raise HDL (good) cholesterol levels. However, do not overdo it and consume it only in the recommended amounts to ensure a healthy heart.

Risk Factors that can not be modifies –

The contributing factors that we cannot do anything about. But having an awareness will save millions by means of prevention.

Men develop coronary artery disease at a younger age. Women have the protective effect of estrogen. However, this risk is equalized when women reach menopause.

The risk of atheromatous disease increases if a first-degree relative has developed a coronary or vascular disease.

This means that the children of parents who have a history of heart disease are at an increased risk of suffering from heart diseases themselves.

Most people who have a family history of cardiovascular disease also have one or more of the other risk factors. Furthermore, just like it is not possible to control your sex, age, and race, you cannot control your family history. Hence, it becomes even more crucial to stay on top of your game and control or treat any other modifiable risk factors as soon as possible.

It is important to remember that you can suffer from a heart attack at any age, although the risk is higher as you grow older. It is never too late to start following a healthy lifestyle. If you are over 40 years old or have more than one risk factor, you should work closely with your physician to address all the possible risks of developing a heart condition. The prevention of cardiovascular disease is critical, and you must begin early in life. Assess all the risk factors and develop a plan for healthy living to minimize the risk as much as you can.